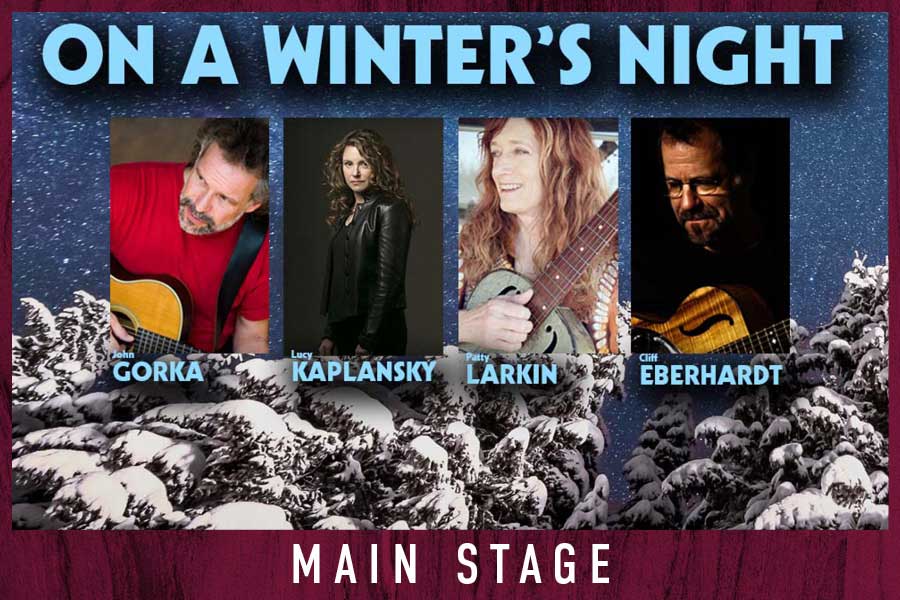 On a Winters Night CLIFF EBERHARDT knew by age seven that he was going to be a singer and songwriter. Growing up in Berwyn, Pennsylvania, he and his brothers sang together and their parents played instruments. His dad introduced him to the guitar and he quickly taught himself to play. Fortunate enough to live close to the Main Point (one of the best folk clubs on the East Coast), he cut his teeth listening to the likes of James Taylor, Joni Mitchell, Bruce Springsteen, Howlin' Wolf, Muddy Waters, Bonnie Raitt, and Mississippi John Hurt — receiving an early and impressive tutorial in acoustic music.  Lucy Kaplanksy started out singing in Chicago folk music clubs as a teenager. Then, barely out of high school, Lucy Kaplansky took off for New York City. There she found a fertile community of songwriters and performers—Suzanne Vega, Steve Forbert, The Roches, and others. With a beautiful flair for harmony, Lucy was everyone’s favorite singing partner, but most often she found herself singing as a duo with Shawn Colvin. People envisioned big things for them; in fact, The New York Times said it was “easy to predict stardom for her.”   PATTY LARKIN is a visionary of sound and wonder, a real deal version of artistry made of equal parts guitar wizardry, vocals shot through with soul and inventive lyrics that ripple across the terrain of the heart.  JOHN GORKA is a contemporary American folk musician. In 1991, Rolling Stone magazine called him "the preeminent male singer-songwriter of what has been dubbed the New Folk Movement." Effective 1/3/22: All indoor guests of City Winery will temporarily need to provide proof of vaccine, a government issued ID, and wear masks indoors when moving throughout public areas.  Please note we will not be accepting negative Covid tests, per City of Philadelphia guidelines.